SOPA has published a Manifesto in advance of the 2021 elections. 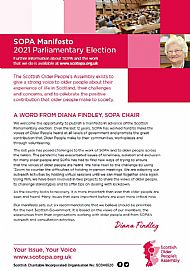 The Manifesto sets out six recommendations that we believe should be priorities for the next Scottish Government. It is based on the views of our members, the experiences from their organisations working with older people and from SOPA’s outreach and consultation activities. The recommendations are:

SOPA is delighted to be partnering with Age Scotland to campaign for an Older People's Champion in every local authority in Scotland.

We are calling on all of Scotland's 32 local authorities to create the role to ensure that older people's voices are heard, their interests catered for and their concerns addressed.

Nine local authorities have already appointed a councillor to the apolitical role but the Age Scotland and SOPA campaign aims to build a network of champions to represent older people's views and identify issues that affect older people locally.

“We in SOPA are very pleased to be working in partnership with Age Scotland, firstly to applaud the local authorities who have already appointed an Older People’s Champion but also to encourage the others to see the value of such a role and follow suit.

"This is an important ambassadorial role and if all local authorities appointed one of their councillors in such a role it would ensure that older people’s perspectives would be raised in all matters discussed in council.

"Such a network of Older People’s Champions would give older people a stronger voice but also be a space to share knowledge to assist each of the champions in their role.”

How to Get Involved:

Find out more about about our Older People's Champions campaign here: www.age.scot/OPC

SOPA partnered with the University of Strathclyde's School of Psychological Sciences & Health on research into people's experience of change during national lockdown. A series of Top Tip films share insights into how people cope and maintain their wellbeing during lockdown.