Diana Findley was elected as Chairperson at SOPA’s AGM on 26 July 2018. 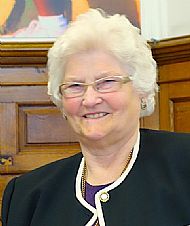 Born and educated in Angus, Diana attended Business College after school  During her working life she was a Personal Assistant at director level in three different international companies in England.  She also worked in hotel management, and latterly worked with her husband in their own business. On retirement, Diana became involved with Better Government for Older People and was the Chairperson of its Scottish section, the Scottish Older People's Advisory Group. She has served on Age Scotland Board and is currently their Regional Ambassador for the Borders as well as a Trustee of SOPA.  Locally, she is chairperson of Borders Older People's Forum, is on the Borders Social Enterprise Chamber and attends various other groups  in relation to Older People and their concerns with Scottish Borders Council and NHS.

"I believe it is most important to strengthen the voices of our older people and make these known and understood by those who have the power to make changes and improve lives."

Health All Round: Gloria Gibbons

Outside the Box: Christine Ryder

11/8 SOPA Planning Group Members Meeting9/9 Ageing Well in the Highlands21/9 Unforgotten Forces event TBC
SOPA is grateful for funding received from the Scottish Government and National Lottery Awards for All.